Yep — It’s been an adventure!

We spent Thursday in Missouri.  The day started with breakfast.  We found a “joint” outside of Harrisonville that had a pork chop breakfast special.  Awesome!

At 8:45AM we followed the staff into Keepers and started shopping.  It was a nice first stop.  We picked up four candlewick dinner plates, some salts and a great Geisha cobalt chocolate pot set.    Then just around the corner we found a HUGE Blenko vase at Trade Fair.

A short drive down I71 took us to Faithful Peddlers in La Mars.  What a wonderful place — and the owners are AWESOME.  This shop has two floors and Mom decided she was going to start up stairs.  And of course, she found the good stuff including a Victorian Brides Basket and a nice RS Prussia bowl.   On a personal note — I found a very unusual Spaghetti Santa Nodder — and NO, it is not for re-sale.

We found ourselves having pancakes in Joplin, Missouri on Friday morning.

But by 10AM (based on a recommendation from the good folks at Faithful Peddler) we were roaming the aisles at Southside Antiques.  Three hours later we had two more boxes to  put into the truck that included: 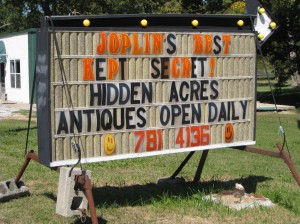 Then based on another recommendation we headed off to Hidden Treasures.  This is a neat little one-owner shop.   He specializes in crystal, colored EAPG and Asian-ware — and while he didn’t have any moriage — during the hour we spent there I learned a ton!

At that point we ran out of recommendations — so we went back to my internet research and decided to stop in Claremore, Oklahoma.  As we drove into town we found a bunch of stores.  After a quick drive-by we decided to stop in at the Hudson – Metcalf Antique Mall .

I found Christmas presents for two VIPs.  And after a quick conversation they sent us down the road to Tulsa to the I44 Antique Mall.  Specifically, they suggested that we visit “Marcia’s” booth.   And for the first time during the entire trip I wished we had more money for inventory.

Can you guess what Marcia is holding?

With an hour to go before closing we identified our “like-to-have’s” — prioritized the items — and chose a cut-off point.  Unfortunately I think I’m going to remember the Blenko we left behind.  Then after a full day we headed off to dinner.

The next thing we knew — Wham Bam — a young driver smacked into my truck!

One thought on “Wham Bam!”