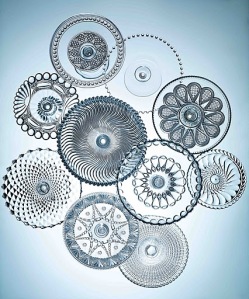 I turned 50 this year. Yep – half a century old. And instead of worrying about “getting old” I decided to celebrate with a “Life is Short, Eat Dessert First” party!

We hired a bartender to make ice cream drinks. We had 3 chocolate fountains with a gazillion items to dip including strawberries, marshmallows and homemade potato chips. And we topped it all off with a ton of finger desserts including cake balls, mini cheesecakes, brownies, dessert bars and cookies. Of course, I didn’t even think about setting the food out until it arrived…

Ah – Salvers to the rescue!

So what’s a salver? Salver came from the Latin word salvare’ which means “to save.” And in Europe during the 17th century a salva tray – filled with samples of the food that was going to be served – was given to the “taster” before the King took his first bite.

The popular name for a salver is cake stand. And although cake stands were first mentioned in 1620 – in the United States they were manufactured around 1770 when prosperous families began serving extravagant dessert courses that often included a pyramid of footed cake stands filled with candied fruits, nuts, puddings, cakes and tarts. 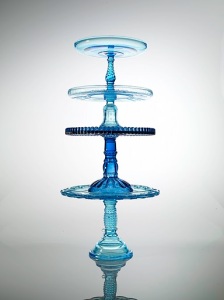 “In the middle a high pyramid of one salver above another, the bottom one large, the next smaller, the top one less; these salvers are to be fill’d with all kinds of wet and dry sweet-meats in glass, baskets or little plates, colour’d jellies, creams, & biscuits, crisp’d almonds and little knickknacks, and bottles of flowers prettily intermix’d, the little top salver must have large preserv’d fruit in it.”

Now – I admit I had not read Hannah’s book before my party. Nor was I trying to re-create a 1770 dinner party (I’m not THAT old!). I just wanted to find a way to put out all of my desserts AND make the table look nice. And since I had recently purchased a collection of cake plates – thank heavens – all I had to do was unwrap them, wash them and set the table.

Now I’m hooked. I LOVE cake stands! And I’m searching for them on all of my antiquing trips. So far most of the cake stands I’ve been able to find are round – but I’ve found a few that are square, hexagonal and even octagonal. And I’ve even snagged a purple slag cake stand and two Vaseline salvers.

But don’t think for a moment  that cake stands are only for cake – just ask Martha Stewart.   She suggests that you can use them as
centerpieces, candelabras or even flower stands.

Labor Day WeekendAugust 31st, 2019
Our VERY LAST show ever, and we want to see YOU!!